Moratorium on IPOs of VIEs

Marketing of IPOs to retail investors

Bring your daughters to work day

ASIC has released a three minute video summarising significant market integrity outcomes achieved through its supervisory, surveillance and enforcement activities from January to December 2015. Statistics and additional information are included in an accompanying webpage.

During the period, key activities included:

Market intermediaries are encouraged to circulate the video and webpage to their staff to increase awareness of ASIC's actions and ongoing areas of focus.

This is the first time that this report has been released in the new format. Previously it was issued as a text report. The change is part of ASIC's efforts to increase the accessibility of its publications. Feedback about the new format is welcome (and can be sent to feedback@asic.gov.au).

Moratorium on IPOs of VIEs

ASIC and the licensed listing exchanges (ASX, NSX and APX) have agreed to adopt a moratorium on initial public offerings (IPOs) of companies with variable interest entity (VIE) structures.

This follows an initial review of VIE structures, their use in international markets, and proposed changes to Chinese laws in this area. This review highlighted concerns about the legal status of VIEs in China and the enforceability of key contractual arrangements by foreign investors.

This decision by ASIC and the ASX, NSX and APX is an example of the importance of proactive administration by the exchanges of well-crafted listing standards. This is particularly important in times of significant change to our equity markets as a result of global trends in capital raising.

Marketing of IPOs to retail investors

The marketing of IPOs can play an influential role in the decisions of retail investors. ASIC has noticed an increase in the number of companies making statements to the public about an offer or intended offer of IPO securities in the lead up to the issue of a prospectus or while an offer is still open. These types of statements may contravene the prohibition on advertising and publicity of offers of securities in section 734 of the Corporations Act 2001 (Corporations Act).

This has become an area of focus for ASIC and we will continue to perform targeted reviews of advertising material connected with IPOs. Our focus on marketing extends to the manner in which brokers and promoters sell securities to retail investors. In recent times we have targeted certain offers and used our compulsory information gathering powers to review selling methods employed by brokers.

Some examples of action we have taken on this issue include:

Bring your daughters to work day

In October, ASIC's Perth office hosted 'Bring your daughters to work day'. This international initiative has been running for more than twenty years with the aim of improving women's workforce participation. ASIC decided to trial this event after concluding that girls may benefit from the opportunity to explore careers in regulation and financial services at an age when they are less influenced by gender stereotypes.

On the day, twenty-nine girls ranging from four to eighteen years old attended ASIC with their mums and dads. After introductions, the girls were organised into three groups (8 and under, 9 to 12, and 13+) to participate in organised activities.

Accompanied by their parents, the junior set cut and pasted collages of 'wants' versus 'needs'. This was followed by interactive activities using the MoneySmart teaching resources.

Those in the middle group explored concepts such as career and financial independence by brainstorming different job options and who these might suit. They also completed a resume building exercise.

Older girls took part in a trading simulation (open outcry setting). Each girl was given $1,850 and 100 shares in five different companies. Over four trading days (of three minutes each) they bought and sold their securities, factoring periodic news events into their decisions.

After the formal part of the program had concluded, girls were given an opportunity to tour the office. Before leaving, each girl received a MoneySmart showbag, complete with pen, magnet and educational literature.

'Bring your daughters to work day' is one of a growing number of diversity initiatives at ASIC. 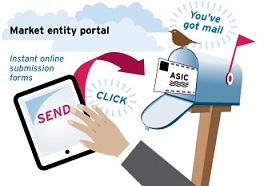 Market participants that operate an AOP are required to notify ASIC of certain information within 10 business days of each AOP Annual Review Date (1 November). The notification is due on or before Friday 13 November 2015. For further information, see Rule 5.6.8B of the ASIC market integrity rules for the ASX, Chi-X and APX markets.

This notification can be completed using Form M62 which is available on the Market Entity Compliance System (MECS).

The form includes instructions on how to complete and lodge the notification using MECS. Submitting the form using MECS enables market participants to manage and retain a record of their interactions with ASIC.

On 25 September 2015, Nigel Derek Heath was convicted and sentenced to two years and three months imprisonment after pleading guilty to two market manipulation charges. The successful enforcement outcome follows an ASIC investigation into trading by Mr Heath in shares and contracts for difference (CFDs) in four resource companies between 16 February 2012 and 11 October 2013.

Between 16 February 2012 and 19 August 2013 Mr Heath carried out 138 transactions involving financial products relating to Petsec Energy Limited (PSA) that had the effect of artificially increasing the price for trading in PSA shares on ASX. While the average value of the 138 transactions was $496, each transaction increased the PSA share price by between 4% and 11.5%, and increased the value of Mr Heath's shareholding in PSA by between $15,878 and $46,928.

Between 2 July 2012 and 11 October 2013 Mr Heath also caused 30 simultaneous buy and sell transactions involving shares and CFDs relating to PSA, Leyshon Resources Limited, Malagasy Minerals Limited and Orca Energy Ltd. These transactions had the effect of artificially increasing the price for trading in those shares on the ASX. These trades, commonly referred to as 'matched trades', caused an increase to the price of shares traded on ASX of between 3.1% and 6.9%.

In sentencing Mr Heath, Judge King SC referred to the need to have a free and open market, uncontaminated by conduct of the nature carried out by Mr Heath. 'His conduct distorted the market and increased the value of his own portfolio and free equity in his CFD trading accounts.' Judge King SC said.

D J Carmichael Pty Limited (DJ Carmichael) has paid a penalty of $300,000 to comply with an infringement notice issued by the Markets Disciplinary Panel (MDP).

The penalty was for entering bids and dealing in a product for a client where DJ Carmichael intended to create a false or misleading appearance with respect to the price of that product, in contravention of Rule 5.7.1(b)(i) of the ASIC Market Integrity Rules (ASX Market) 2010.

In determining this matter and the appropriate pecuniary penalty to be applied, the MDP noted (among other factors):

The majority of market integrity outcomes ASIC achieves are not publicised in the media, but this does not detract from their importance. Every day, ASIC officers work to ensure our markets are fair and efficient. These are their stories.

ASIC recently reviewed meeting materials prepared by a company which was seeking to rely on obtaining member approval for a transaction that would have an impact on the control of the company. The meeting materials stated that two cornerstone investors were not associated, despite them having acted together in negotiating and then entering into a joint agreement with the company under which they both received shares.

ASIC sought and successfully obtained amended disclosure from the company that confirmed that the investors were in fact associates for the purposes of the transaction. This change meant that investors would be able to understand the true state of play in relation to the company, which is particularly important when control of the company will change as a result of a transaction.