ASIC media releases are point-in-time statements. Please note the date of issue and use the internal search function on the site to check for other media releases on the same or related matters.

ASIC’s review of the sale of consumer credit insurance (CCI) by 11 major banks and other lenders has found that the design and sale of CCI has consistently failed consumers.

ASIC’s report (REP 622) highlights the very low value of CCI products and the unfair way they are promoted and sold to consumers. This work forms part of ASIC’s broader priority to address fairness to consumers and, in particular, harms in insurance.

ASIC Commissioner Sean Hughes said, 'We are deeply troubled by the findings in our report, and the stories they tell of unfair practices occurring within Australia's largest and most well-known financial institutions. Lenders and insurers have had more than enough time to improve sales practices and provide better value for consumers. An inevitable consequence of these widespread failings and mis-selling practices will involve ASIC taking significant enforcement action against some of the entities named in our report'.

The problems identified in the review are being addressed by ASIC in the following ways:

ASIC expects lenders and insurers to design and offer products with significantly higher claims ratios and will continue to collect and publish data to measure improvements.

'If we do not see early, significant and sustained improvement in the design and sale of consumer credit insurance, our next steps may involve the deployment of our new product intervention power where we see a risk of significant consumer detriment. We also will not hesitate to pursue civil penalties where there has been a failure by any lender or insurer to act efficiently, honestly and fairly. All options are on the table,' ASIC Commissioner Sean Hughes said.

ASIC's report also sets out important design and distribution standards for CCI sold by lenders. Lenders and insurers are expected to meet these standards or entirely cease selling CCI until they do. Several lenders have already ceased selling CCI.

ASIC Commissioner Sean Hughes added, 'Regrettably, the ongoing systemic failings and misconduct we have seen in the CCI market demonstrate that a range of robust regulatory responses is required. ASIC is committed to address the unfairness to consumers and lack of transparency our report has uncovered. Product issuers and distributors in the CCI market need to start to put their consumers front and centre.'

In October 2011, ASIC issued Report 256 Consumer credit insurance: A review of sales practices by authorised deposit-taking institutions (REP 256), which made 10 recommendations about sales scripts, disclosure, training programs and monitoring systems to reflect best practice and reduce the risk that CCI may be mis-sold to consumers.

In August 2017, ASIC raised concerns about the way in which CCI was being sold. As a result, the Banking Code of Practice now has a four-day deferred sales period for CCI sold with credit cards and personal loans in branch or over the phone, effective 1 July 2019. However, this obligation only applies to those who subscribe to the Code.

In December 2017, ASIC commenced a review of the design and sale of CCI. We required the 11 lenders to undertake an independent review of their CCI sales practices and we collected detailed data about the way these products performed for consumers.

The lenders in ASIC's review are:

ASIC’s MoneySmart website has information to help consumers know what to consider before taking out consumer credit insurance. 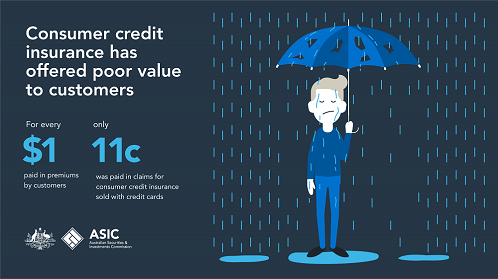