Published by the Stockbrockers Association of Australia in the Stockbrokers Monthly, October 2015.

The stockbroking industry has been slow to embrace gender diversity. As a result, there are significantly fewer female stockbrokers than male. This discrepancy is even more pronounced at senior levels. Until a few years ago, ASIC's Market Integrity Group (MIG) also exhibited a gender imbalance, with female participation skewed towards more junior positions. For the past two years, MIG has undertaken a range of initiatives to improve gender diversity. This has contributed to an increase in women at senior management levels within the group.

As an organisation, ASIC has been pursuing a diversity mandate for a number of years. Gender diversity is one aspect of this mandate. We previously implemented gender targets, which are incorporated into the performance agreements of our senior executive leaders (SELs). Although not a legislative requirement, we report on our performance against these targets in the ASIC Annual Report. We consider this appropriate for a range of reasons, including requirements on ASX listed companies to report on their gender diversity profile. Figures for the 2014-2015 financial year show that ASIC has made significant progress towards achieving these targets, although further work remains to be done.

What these figures don't show is that gender diversity has proven easier to achieve in some parts of ASIC than others. MIG was formerly included in the latter category, but has made a striking about-turn. In the past year, MIG achieved a 4.85% increase in the number of women at senior management levels, exceeding the group's individual target of 4%. In part, this change can be attributed to MIG leaders' determination to embed gender diversity as a strategic and operational concern. In the words of Commissioner Cathie Armour, "Diversity drives innovation, creativity and problem-solving capability, as well as individual and organisational productivity. This makes it a business imperative."

Initiatives to foster gender diversity occur at the group level and within individual teams in MIG. They may be one-off activities – in 2014, MIG held a 'Women in MIG' breakfast at which senior female executives in financial markets spoke about their experiences – or measures to implement ongoing change. For example, we have a 'Diversity Commitment' to guide senior managers in their recruitment decisions. This one page document sets out actions to take when hiring staff. Examples include offering positions on a part-time and full-time basis and requiring short-lists to have equal numbers of male and female candidates.

MIG leaders actively encourage and support female staff members to participate in career development opportunities, and back this up by volunteering their own time to champion these initiatives. The Women in Law Enforcement Strategy (WILES) mentoring program is designed to encourage women to pursue careers and senior positions in Australian law enforcement and regulatory agencies. The WILES program matches mentors from Commonwealth government agencies with mentees from different agencies. This year, MIG SELs Greg Yanco and Oliver Harvey are WILES mentors. MIG Executive Level staff members Katharine Goulstone and Rhonda Luo are current WILES mentees and Jane Rennie is a former mentee. 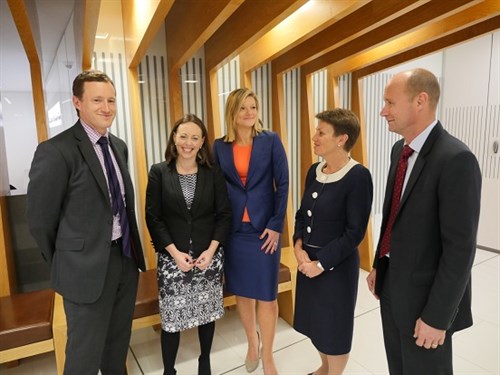 Oliver Harvey commented that "Leaders in financial markets play a critical role in addressing this issue. A commitment to gender diversity and diversity more broadly is not just the ‘right thing to do’, but makes overwhelmingly good business sense." For his part, Greg Yanco said "I have daughters myself. I don't like the thought of their career opportunities being limited by gender. Unfortunately, I see this happening in the stockbroking industry. It's a shame that business heads don't seem to realise the depth of talent they are forfeiting by not championing their female staff."

Critically, the initiatives and results outlined above have occurred against a backdrop of significant organisational support. In addition to the Diversity Council, which provides strategic leadership on all ASIC's diversity activities, the Women in ASIC committee (whose members include men and women at all levels) ensures there is a continuous pipeline of new ideas to trial. For example, later this month our Perth office will host 'Bring your daughters to work' day. This international initiative has been running for more than twenty years with the aim of improving women's workforce participation. The Women in ASIC Committee decided to pilot the event after concluding that girls may benefit from the opportunity to explore careers in regulation and financial services at an age when they are less influenced by gender stereotypes.