ASIC media releases are point-in-time statements. Please note the date of issue and use the internal search function on the site to check for other media releases on the same or related matters.

In the last six months, ASIC achieved 323 enforcement outcomes to protect financial consumers and enhance the fairness and efficiency of Australia’s financial markets. This included criminal as well as civil and administrative (e.g. banning or disqualification) actions, and negotiated outcomes, including enforceable undertakings. 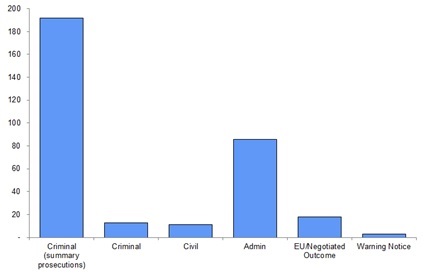 The report outlines some important cases and decisions during the first half of 2015 and highlights some of ASIC’s ongoing enforcement priorities, including tackling poor culture, poor conduct in the retail margin FX trading industry and illegal phoenix activity.

‘ASIC is committed to holding those who intentionally break the law to account so that trust and confidence in our financial services industry and markets is strong.’ ASIC Commissioner Greg Tanzer said.

‘Poor culture is a key driver of poor conduct in the financial services industry. Given the strong connection between the two, tackling poor culture will be a major priority for ASIC over the next six months and beyond.  We'll ensure that everyday Australians who suffer loss are remediated appropriately and as quickly as possible.’

Notable outcomes over the past six months include:

Melinda Scott: financial adviser Melinda Scott was sentenced to six years and three months imprisonment with a three year and ten month non-parole period. Ms Scott had earlier pleaded guilty to defrauding more than 150 clients of over $5.9 million over a period of 20 years.